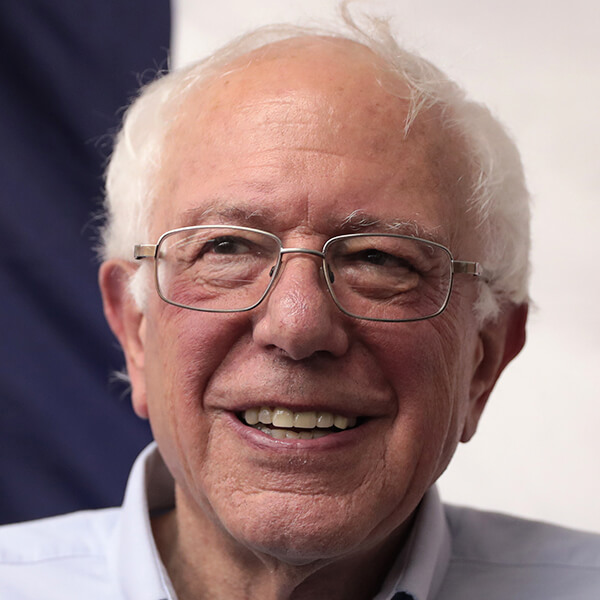 An independent senator from Vermont determined to encourage economic, racial, social, and environmental justice for all.

Bernie Sanders is an iconic figure in the U.S Political ecosystem. He is an independent senator from Vermont who has helped push the Democratic Party leftward with revolutionary ideas like “Medicare for all,” a $15 minimum wage, and tuition-free public college. He served in the House of Representatives from 1990 to 2006 and was previously the mayor of Burlington, Vermont.

Bernie considers the existing health care system as “dysfunctional” and is appalled by “the grotesque levels of income and wealth inequality.” He wishes to make America more inclusive and plans on making radical changes. He aims to –

Bernie Sanders’s political career reflects how much concern he is about income inequality. In his recent tweet, he said, “This is the richest country on Earth, and we have 40 million in poverty, 34 million with no health insurance and half our people living paycheck to paycheck,” he further added, “I refuse to accept that as normal.”

To bring the normalcy for common people, Bernie has outlined some steps to reform the economic policy of the United States.

Bernie Sanders promotes the idea that health care is a fundamental human right, not a privilege. In his 2019 speech, he said, “We say to the private health insurance companies: whether you like it or not, the United States will join every other major country on earth and guarantee healthcare to all people as a right.”

Sanders is among those to scrutinize the obvious reluctance of the government to force more significant cybersecurity measures. Bernie expresses his concern not only about security but privacy as well.

America is now the world’s leading jailer. It is being said because of the record of more than 2 million locked up people in America, which is more of Americans than any other nationalities on Earth. The stats do not include another 5 million people who are under the supervision of the correctional system.

Instead of spending $80 billion a year on jails and imprisonment, Bernie has planned to invest in jobs and education for our young people. Moreover, to reform the ongoing criminal justice policy, Bernie has outlined the following necessary plans:

Education is one such field that is capable of forming the future of the whole world. In today’s time- education is unaffordable; should this mean the future that we are seeing is merely a fantasy? Bernie Sanders believes that the citizen deserves freedom – true freedom. He claims that a person is not truly free when he/she graduate college with hundreds of thousands of dollars in student debt.

Bernie plans to end the racial and class disparities that persist throughout higher education. His education policy reform includes:

Bernie Sanders has been a strict critic of Trump’s presidency. When it comes to Immigration policy, Bernie claims that Donald Trump has used the demonization of immigrants for political gain. He believes America is a dream home to everyone, and thus, he wants to ensure that every immigrant who would step into America would help strengthen the country as a whole. While at the same time as a president, he would work in developing a movement to create an America where everyone shares in the prosperity that they and their ancestors helped build. His reformed immigration policies are:

Bernie believes that while military force is required, it should always be a last resort. To support his statement, he further adds, We need a robust national defense infrastructure, but we should focus more heavily on diplomatic alternatives to war.

Bernie believes that gun control is chiefly a state issue because attitudes and responses concerning firearms vary hugely between rural and urban communities. Although, Bernie considers there are situations where the federal government should mediate. In his recent interview, he said,

“Folks who do not like guns are fine. But we have millions of people who are gun owners in this country — 99.9 percent of those people obey the law. I want to see real, serious debate and action on guns, but it is not going to take place if we simply have extreme positions on both sides. I think I can bring us to the middle.”

Bernie Sanders has a vision for extricating the U.S. from wars in the broader Middle East. To tackle the security issues, he wants to reorient America’s foreign policy that would result in privileged diplomacy and collective work with allies over unilateral military action.

Bernie Sanders’s campaign slogan, Not me. Us. indicates that he is part of things that are larger than himself. He has released a plan to remove the corporate money from politics and to end the corruption of national party conventions. He wants to reform public elections, ban advertising during presidential primary debates, institute a ban for former members of Congress, and senior executives.

His electoral policies include:

Bernie Sanders, in his rallies and campaigns, discussed a plan to legalize cannabis in all the states of the U.S. His plans are as follows:

Climate change is a global emergency. Sanders has come up with a plan to combat climate change to an extent and to minimize its effects. He supports the “Green New Deal,” which aims to decarbonize the U.S. economy by 2050 fully.

His plans to reform Climate & Energy include:

Bernie Sanders introduced a plan to help family farmers and rural residents, promising to break up corporate agricultural holding. He wishes to invest heavily in social and economic programs in struggling rural communities. “In rural America, we are seeing giant agribusiness conglomerates extract as much wealth out of small communities as they can, while family farmers are going bankrupt and, in many cases, treated like modern-day indentured servants,” he said.

Bernie Sanders supports people’s right to assemble, practice freely, and express their faith. He advocates for the separation of church and state to protect both personal religious freedoms and civic equality.

With Sanders as president: