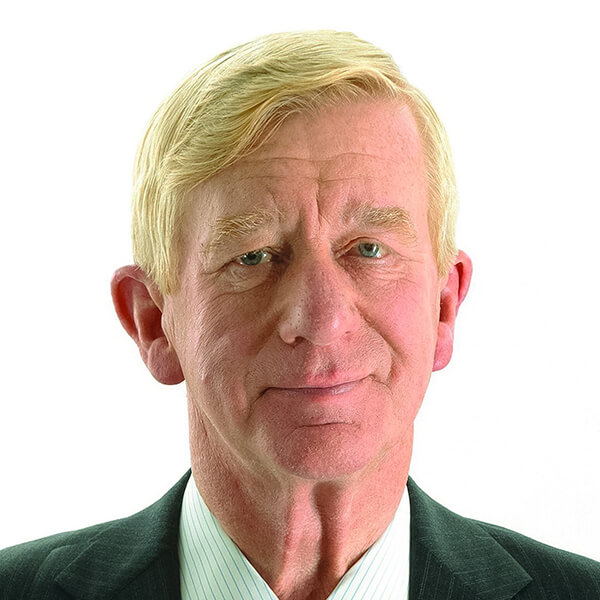 Bill Weld is an American lawyer and politician. He served as the US attorney for the District of Massachusetts under President Reagan and Governor of Massachusetts from 1991 to 1997. He is running against his own party incumbent because he believes that the US is “facing the alarming and rapidly intensifying dysfunction of our current government.”

As president, he seeks to uphold the three tenets of good American governance- respect for the rule of law, responsible fiscal restraint, ensuring and protecting the individual liberties of all Americans, and hold those individuals responsible who abuse or neglect the public trust placed upon them.

Bill Weld has a positive track record of social issues such as abortion and LGBTQ rights. He has pushed forth health and treatment schemes for immigrants and refugees and helped to increase the number of H1B visas. He believes that there is no such thing as government money. Instead, he considers it taxpayer’s money. He helped to balance the Federal budget as states do. Weld prioritized zero-based budgeting and to cut spending and taxes. He insisted on reducing 20% waste in every federal agency as he was one of the most fiscally conservative governors. He has voted for minimum wage hikes as a governor.

Weld has already made significant changes like the abolishment of wasteful programs, support balanced budgets, and a balanced budget in the downturn after a boom decade of spending. So, as president Weld will:

Weld told his insurance regulators that he wanted worker’s compensation rates frozen and changes made in the system that would get the problem under control. They responded, and so did the workers’ compensation insurance industry that they regulated, which ultimately resulted in a considerable change. During a speech, he stated, “As to health care, instead of arguing endlessly AND fruitlessly about whether the Affordable Care Act should be repealed because let’s face it, we do not have a consensus in Congress. There are various common-sense health care issues that could be addressed immediately, across party lines. Consumers should be permitted to set up personal health care savings accounts and to choose their health care provider. They should be free to buy pharmaceutical drugs across state lines and in other countries. Their choice, not the government’s.”

When it comes to healthcare, he is mainly concerned about what makes health care cheaper, more accessible, and of higher quality. He believes that there’s “too much government” involved in the Affordable Care Act. He supports expanding Medicaid access and wants people to be able to buy health insurance across state lines to help bring costs down. If elected president, here’s what the health care system look like under his leadership:

Cybersecurity is still a significant issue in American politics in the wake of Russian election interference. Weld’s campaign has made the following comments about the same.

Weld’s remarks on Criminal Justice during a recent debate shows that he’s had a change of heart. He said that he used to be a hard-boiled prosecutor, and it has to stop. Weld’s shift on drug crimes is in line with changes in public opinion on the issue. He said the context for his earlier tough-on-crime posture was the seven years he had just spent in the US Justice Department. As well as state guidelines in Massachusetts that often allowed defendants to go free after serving only a fraction of their original sentence. “There was no truth in advertising at all, so I was way up on my high horse about that,” Weld said. Furthermore, under Weld’s presidency:

Weld said in an interview that more attention should be given to online education. While he was governor of Massachusetts, he signed the Education Reform Act aimed to raise accountability and standards in the public school system. Bill Weld favors more availability and options for education. He supports home-schooling, online education options, and charter schools. He suggested abolishing the Department of Education because he feels decisions should be made by the States, communities, and parents–not by the federal government. As president, he would:

Weld compares Trump’s proposals for mass deportations of undocumented immigrants to the practices of Nazi Germany. He supports a form of legal status for undocumented immigrants. He supports increased immigration, which he says provides the “human power” for agriculture and construction industries. He wishes to bring “more and longer” work visas and an expanded guest worker program. He opposes a path to citizenship for the country’s estimated eleven million undocumented residents, but he wouldn’t deport most undocumented immigrants. Weld criticizes the fact that international students have to return to their countries of origin after they have earned degrees at U.S. schools, saying, “We are educating our competition.” He criticizes Trump’s proposal to withdraw aid from the Northern Triangle countries of El Salvador, Guatemala, and Honduras, as reducing aid will result in more people there migrating. Weld compared Trump’s proposal to ban Muslims from entering the country to the policies of Nazi Germany. He argues that Trump’s immigration policies are racist, and he wishes to change that. As president:

Weld has advocated for a more modest defense budget and a reduction in U.S. military entanglements around the world while maintaining U.S. military superiority. He argues that it is “tremendously important” for the United States to have “demonstrated military supremacy in both air and naval power” to influence world events. However, he has opposed military interventions in Iraq and everywhere else. He says that the United States “must carefully conserve our strength, using force only where it is necessary.” Weld pointed out, pulling back on overseas troop commitments can lead to savings and that the Pentagon has too many bases. He stated the missions without specific congressional approval are assignments of war-making powers to Congress. Weld refers to nuclear proliferation as the world’s number one security threat. He condemns Trump’s suggestions that allies like Japan and South Korea develop their own nuclear weapons.

Weld does not agree with President Trump’s idea to arm teachers with guns. He thinks legally-acquired rifles in the hands of private citizens are “a bulwark against government oppression.” However, he thinks there should be red flag laws to keep guns out of the hands of people with mental illness. He also wants waiting periods when it comes to gun purchases and a ban on handgun sales to people under the age of 21. He has made his views clear by stating the red flag laws would be a giant step toward preventing mass shootings.

In Weld’s editorial titled “Reclaiming Republican Foreign Policy,” he presents a view far removed from the argument for non-intervention expected from a libertarian. He doesn’t aim at altogether terminating the intervention overseas, including war, sanctions, and covert “regime change” operations, that has been the United States government’s pursuit for decades. Instead, he promises to make sure that intervention continues. According to Weld, the problem is lack of response. Weld says that the U.S. needs a “flexible approach” on North Korea, which sounds promising. He referred to President Trump’s decision this week to withdraw American troops from the border between Syria and Turkey a “betrayal” of the Kurdish forces that have fought ISIS alongside U.S. troops.

During a speech in 2019 at Tufts University, Weld suggested that Trump might not even appear on the 2020 ballot. Weld hinted that choosing a secret vote about impeachment is a convenient option for the Senate. He also said that he supports the impeachment of President Donald Trump. As president, he would do the below stated to make necessary changes in the electoral:

Weld publicly announced that he supports legalizing cannabis by decriminalizing drug use and retroactively reducing sentences for those already serving time. Federal action on cannabis-related issues seems completely unnecessary and unacceptable to him. Actions are taken by Weld while attempting to legalize marijuana:

Weld has criticized the climate change proposals put forth by 2020 Democratic presidential contenders without mentioning any names, arguing that a carbon tax is a much more feasible and economical alternative to address the crisis. He thinks climate change is a foreign priority. As governor, he supported hybrid electric cars and natural gas and deregulated the electric industry, setting a model for other US states to introduce competition and market mechanisms.

Changes he wishes to make during his presidency:

Weld said that the United States has the highest rate of productivity as we are the most technologically advanced country in the world. He added that free trade is going to produce high wage jobs in the United States. Weld understands that the relationship with China will be a complex one as the US and China are the two biggest trade-related countries in the world market.

Weld believes that drug use should not be a criminal offense. He has also called for federal decriminalization of marijuana and the lowering of the drinking age.

His opinions about social issues:

Weld appreciates tax cuts, but he does not appreciate the current president’s decisions for the same. He is a traditional conservative when it comes to the economy, prioritizing cutting spending and cutting taxes. He supports repealing the federal death tax and reducing the capital gains tax rate to 10% as these taxes do not raise significant revenue.

Weld feels a need to restructure the entire tax system as he doesn’t want to choose between confiscatory taxation and deficit-creating tax cuts for the super-rich.

As president Weld plans to: