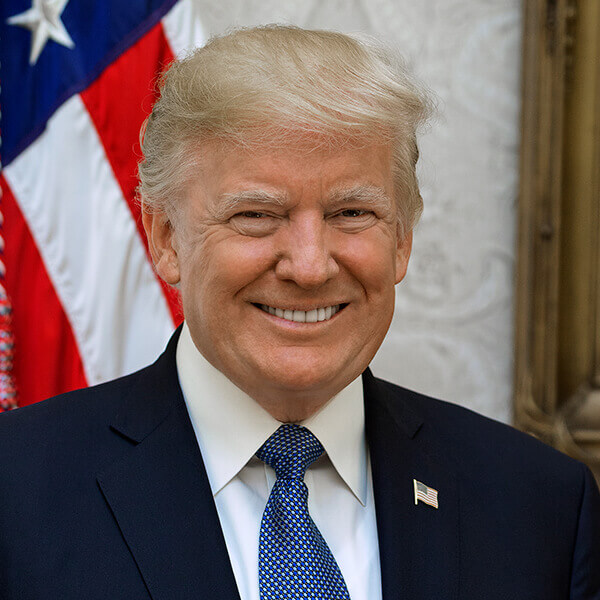 President Trump is the incumbent, real estate mogul, businessman, and former reality television host. Trump has pledged to “Restore America to its former glory,” and during his current term, he has reversed several Obama era policies to accomplish that.

He is determined to place America first when dealing with the international community, enforcing staunch immigration laws to curb illegal immigration and remove regulations that locked up America’s ability to innovate and profit. Trump has said that he is “totally flexible on very, very many issues.”

Individual and corporate tax cuts characterize the economic policy of the Trump administration, attempts to repeal the Patient Protection & Affordable Care Act, trade protectionism, immigration restriction, and deregulation focused on the energy and financial sectors. An essential part of President Trump’s economic strategy during his initial three years was to boost economic growth with tax cuts and additional spending. In his second term, he seeks to-

Trump has stated multiple times that he supports repealing the Affordable Care Act (ACA or “Obamacare”), which the president refers to as a “complete disaster”, and replacing it with a “free-market system.” He released his health care plan, and it called for allowing health insurance companies to compete across state lines and for making Medicaid into a block grant system for the states.

President Trump has locked horns with many large tech firms in the US, accusing them of conspiring to defeat him in 2020. While he has repeatedly washed over concerns about Russian interference in US elections, his administration has imposed sanctions against Russia and the intelligence assets deemed responsible.

President Trump’s administration approaches law enforcement as a crackdown on violent crime, along with a refusal to regulate the police departments that fight it and overhauling the Obama era programs that were implemented to ease tensions between communities and the police.

President Trump chose Republican financier Betsy DeVos, a notable Michigan charter school advocate, as Secretary of Education, it was a controversial nomination and VP Pence had to tie break the confirmation vote.

Immigration policies follow economic nationalism. Trump’s “America First” program seeks to guard American workers and businesses. It’s a departure from decades of a U.S. immigration policy that centered on family reunification, asylum, and safe harbor of refugees. Most of what he’s done is through executive actions and laws, not through Congressionally-approved plans. Soon, he will pass a bill to send to Congress that would grant immigration status based on skill and merit.

Donald Trump is rebuilding the American military, defeating terrorist organizations, and confronting rogue nations to protect America and our allies.

Donald Trump generally opposed gun control, but supported the ban on assault weapons and supported a “more extended waiting period to purchase a gun. While campaigning for the presidency, Trump modified some of his positions on gun issues, calling for the extension of gun rights.

When it comes to the foreign policy of the Donald Trump administration, it includes a focus on security, by fighting terrorists overseas and strengthening border securities and immigration controls. The policies also include a plan for an expansion of the U.S. military; an “America First” approach to trade; and global diplomacy, which means ‘becoming friends with old enemies.’ As a presidential candidate, Trump emphasized the get-tough approach toward suspected terrorists.

Last year, President Donald Trump was found defending the constitutional mechanism he once opposed and called a ‘disaster.’ He had won the electoral college in 2016 while losing the popular vote. Here are a few key points on his views about electoral politics:

Donald Trump has never gone out to support marijuana legalization. But, last year in September, he did say that he never had any objection to US states legalizing forms of marijuana. As a matter of fact, he stated his administration would leave legalization decisions up to the individual states. Trump was seen sharing some conflicting views on medical marijuana legalization. Let’s take a quick look.

President Trump has questioned the science of climate change, repeatedly expressing doubts about the correlation between human activity and global warming. He has argued for expanding domestic fossil fuel production and has pushed environmental regulation rollbacks implemented by President Obama.

President Trump had declared his new US-China trade agreement as a sure sign of victory for American farmers. A synopsis of the new agreement states that Beijing will now “strive” to purchase an additional $5bn (£3.8bn) of US agricultural products over the next two years. Throughout his term, Trump attempted to rescue segments of the economy he believed were neglected by politicians at home and battered by competitors abroad, like US manufacturing, trade, and agriculture.

A recent survey shows that white evangelicals mostly see Trump as fighting for their beliefs and advancing their interests. They feel their side generally has been winning recently on political matters vital to them. However, when it comes to Trump’s personal qualities and conduct, many express mixed feelings. Here are a few highlights from the recent developments in this regard:

Donald Trump’s Tax radical Cuts and Jobs Act (TCJA) on Dec. 22, 2017, slashed the corporate tax rate from 35% to 21% in 2018. The corporate cuts are here to stay, while the individual changes expire at the end of 2025 unless Congress acts to renew some or all of the provisions of the TCJA.

How Does It Affect Us

The TCJA is complicated, and its different terms affect each family differently based on their personal situations: