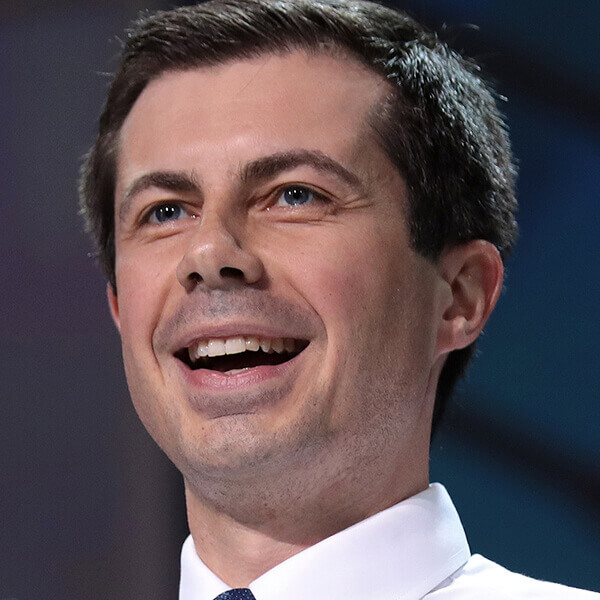 It’s time for a new generation of American leadership.

The Democratic mayor of South Bend, Indiana, and the youngest candidate in the 2020 presidential race, he presents himself as a new kind of leader who rallies Americans together to solve urgent challenges.

Buttigieg is a Rhodes Scholar who attended Harvard College and Oxford University and can speak multiple languages. He has based his campaign on the idea of generational change within American politics and governance. Initially considered a fringe candidate, his campaign has now made significant momentum.  He is also the first openly gay man to contest for the Democratic presidential nomination.

Mayor Pete envisions an economy that delivers more to all Americans. Families need higher incomes and lower costs and a brighter future for all our children. In the US, everyone should see a share of economic gains, and everyone should have access to real opportunities. To ensure that the next generation is always better off than the previous ones.

He believes that the country’s success should not be measured by the size of the stock market or gross domestic product but by the success of middle and working-class families, and to ensure that he has outlined some steps-

Mayor Pete believes that the healthcare system in its current state leaves Americans feeling powerless and taken advantage of.

His plan, “Medicare for all who want it,” will put Americans in charge of their health- by making a public option available at affordable prices and giving Americans a real choice. The plan is designed to either incentivize private insurance firms to offer competitive prices or create a natural glide-path to ” Medicare for all.

Buttigieg is dedicated to being the leader that will take bold action at a federal level to not just reduce crime but also reduce the prison population. He believes we need a legal system that benefits all and promotes true justice. To this end, he intends to-

Buttigieg thinks that in the US, the quality of education a child receives is too often dependent on the zip code. He’s dedicated to providing educators, especially those of color, should be treated as soldiers and paid like doctors. He believes the system requires a complete overhaul.

Pete is determined to create an immigration system that reflects what the American people want; a majority of Americans support a pathway to citizenship for undocumented immigrants. To facilitate this, Pete intends to-

Pete accredits his time as a navy lieutenant in Afghanistan was a life-changing experience because it provided him with an opportunity to serve with the people of every conceivable background. He aims to root his campaign and then later his administration, in the ethos of service-

Pete believes that gun violence is an urgent health crisis that needs to be addressed immediately to secure the communities most vulnerable to this epidemic. He wants to put forth bold solutions to this problem-

Buttigieg says that the current administration has “fractured & endangered” US alliances. He believes that “countering climate change, promoting democracy and human rights” should be a central goal of US diplomacy.

Pete believes that democracy means that when it comes to choosing the nations’ leaders, nothing should be allowed to overrule the vote of the American people

Pete believes that regulating recreational marijuana should be a personal responsibility issue and should be decriminalized.

He argues that racial disparity is attached to whether somebody is likely to experience imprisonment as a consequence of a non-violent drug offense. It is also evident from the rate of incarceration that decriminalizing & legalizing marijuana is the most rational option going forward.

Pete considers climate change to be a “Life-and-death” issue for the current generation. He has proposed a climate plan that seeks to transition the US away from carbon-intensive energy sources.

Pete opposes economic isolationism and says that the U.S. must compete for global markets, but trade deals must benefit American workers.

He similarly objects to farm subsidies, saying, “We shouldn’t have to pay farmers to take the edge off of a trade war that shouldn’t have been started in the first place.”

Buttigieg has repeatedly stated  that “God does not belong to a political party in the United States of America.” He has talked about religion more than most other candidates from his party. He is also the first openly gay presidential candidate in US history. He believes that systemic bigotry has touched every part of American life, from health to home-ownership and he intends to usher in a new era-

Buttigieg has repeatedly criticized the 2017 tax reform bill signed by President trump multiple times, stating that it is just another tax cut provided to the wealthy. He has hinted a few tax increases that he would consider implementing as president-

A higher income tax rates on the wealthy, a carbon emission tax, a financial transaction tax, more equitable use of the estate tax, and eliminating unspecified corporate tax breaks.